This report, published with contributions from Propulsion Québec (the cluster for electric and smart transportation), describers the current and future labour demand and the skills needed by Quebec’s EV (electric vehicle) industry.

It includes workforce development solutions, training, reskilling, and upskilling that will help fill the demand for new roles in this growing sector. 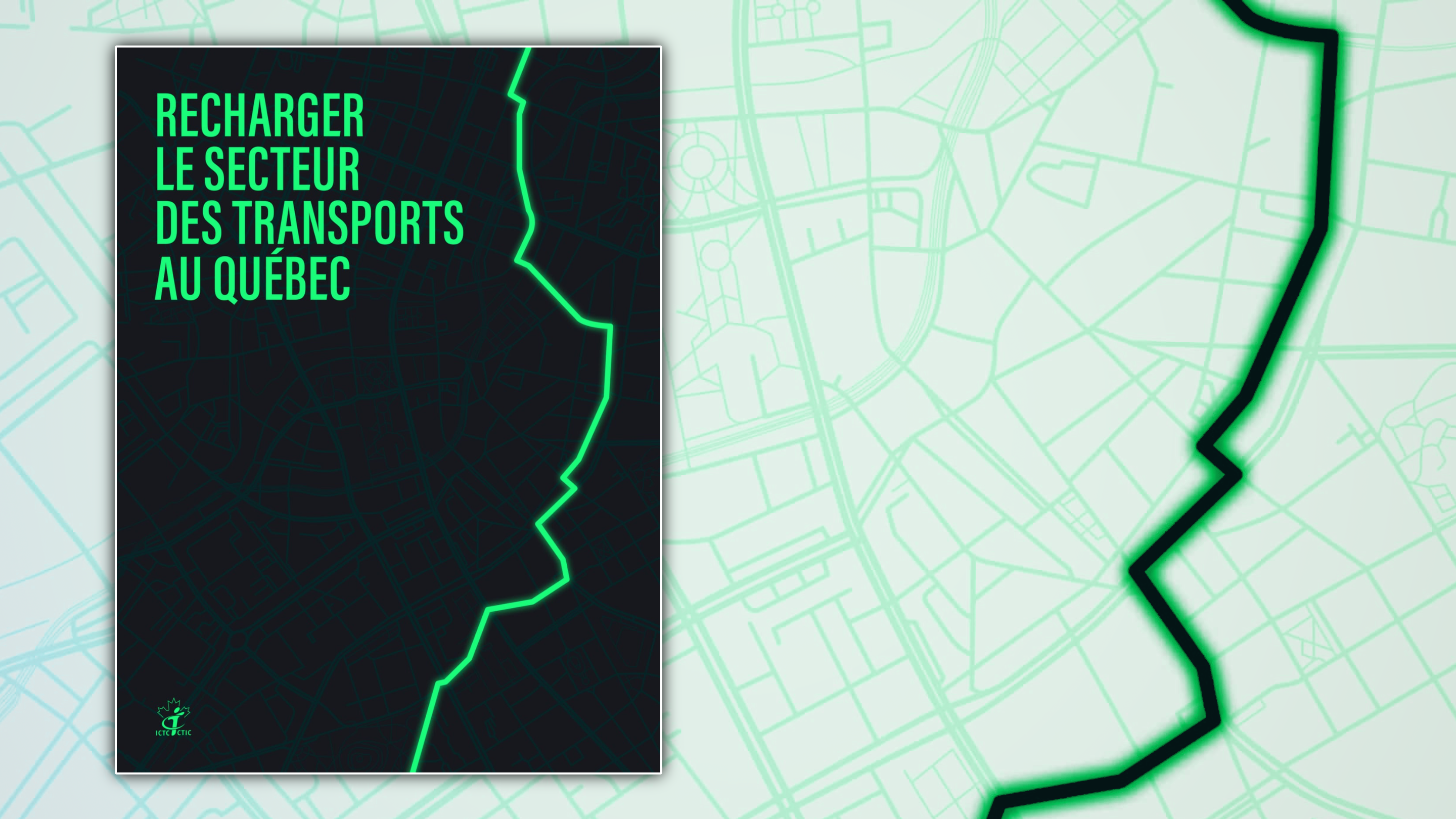 Quebec has emerged as a significant player in the Canadian electric vehicle (EV) industry, with expanding ability to compete internationally.

In alignment with the Quebec government’s 2030 Plan for a Green Economy, the province has made electrification of the transportation sector a major priority:

Quebec’s EV leaders are optimistic about the overall labour market outlook, however, the development of workforce upskilling or reskilling programs could enhance Quebec’s ability to effectively respond to evolving market demands and to maintain the transport sector’s competitive edge.

EV Industry in Canada and Quebec

The growth of Canada’s EV industry is a response to climate change. Milestones in the effort to mitigate climate change include Canada’s signing of the Kyoto Protocol in 1997 and recent commitments to achieve a net-zero economy by 2050.

The transport sector is an area of key focus because it is the second largest source of carbon emissions in Canada: 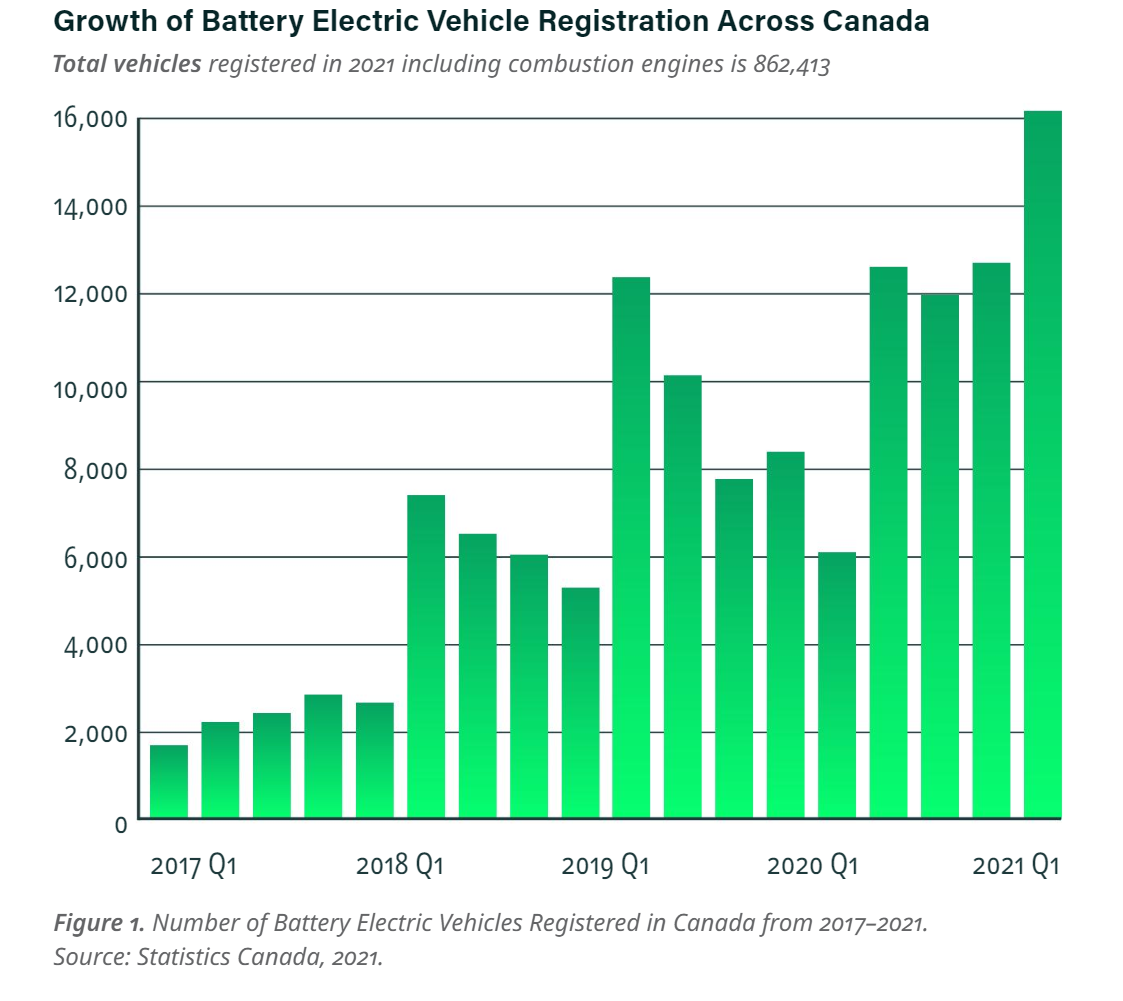 Between 2016 to 2020, hybrid and plug-in hybrid electric vehicles accounted for a larger share of new vehicle registrations in Canada.

Canada and the Global EV Industry

Canada is the eighth largest producer of EVs in the world, with a similar industry size as France, Japan, South Korea, and Sweden.

Canada is also the only country in the western hemisphere that has all the required critical minerals for manufacturing EVs.

Canada’s automotive industry hub is based in Ontario and has the largest concentration of automotive assembly plants and R&D facilities in North America, and includes:

The auto industry is Canada’s second largest export, contributing $74.2 billion of GDP in 2020.

Car manufacturer commitments to electrification include:

Quebec is an established global leader in the transport equipment industry: 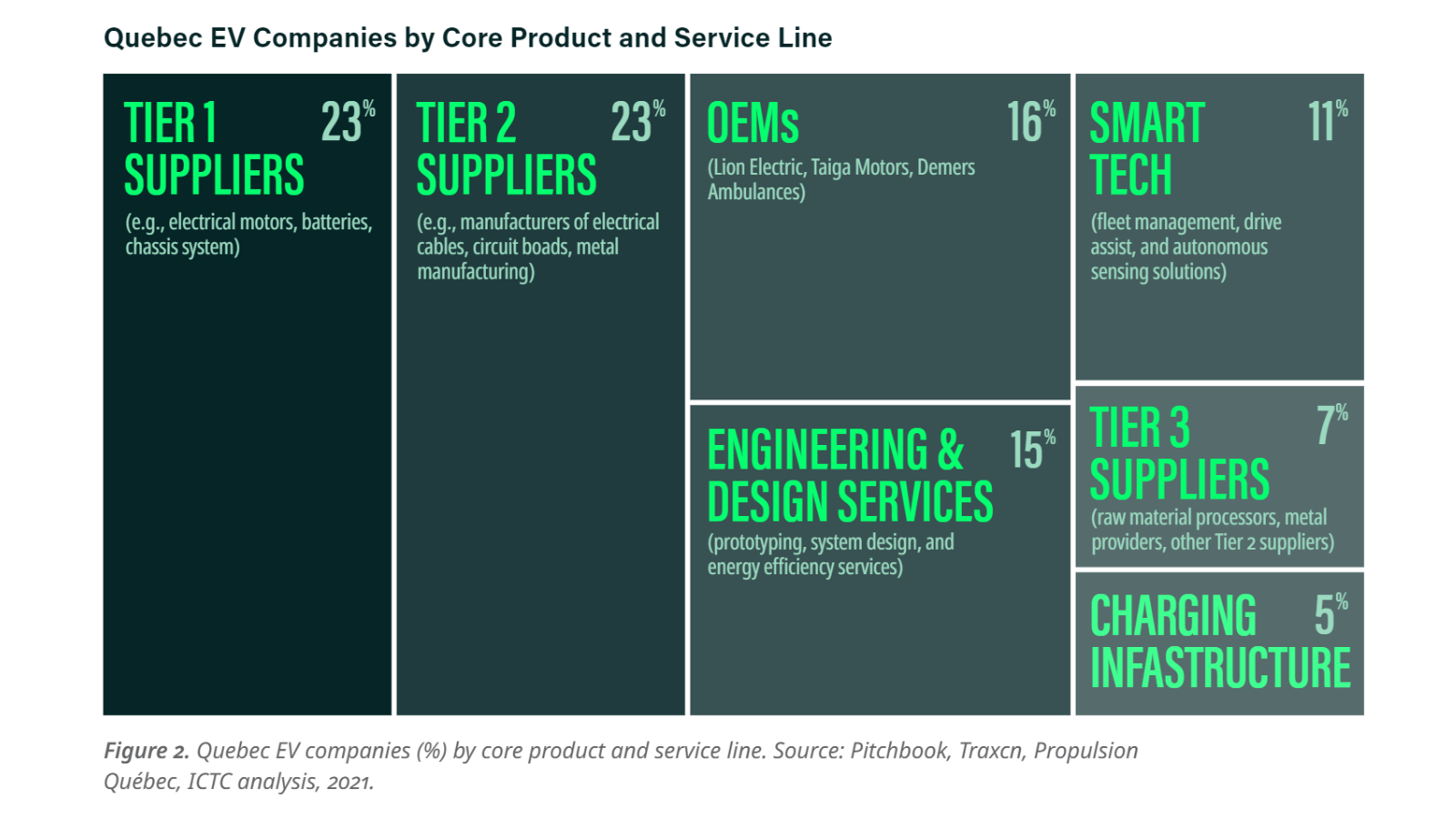 Company size is one indicator of overall maturity of a business. A predominance of smaller companies suggests an industry in early stages of development, which typifies Quebec’s situation. 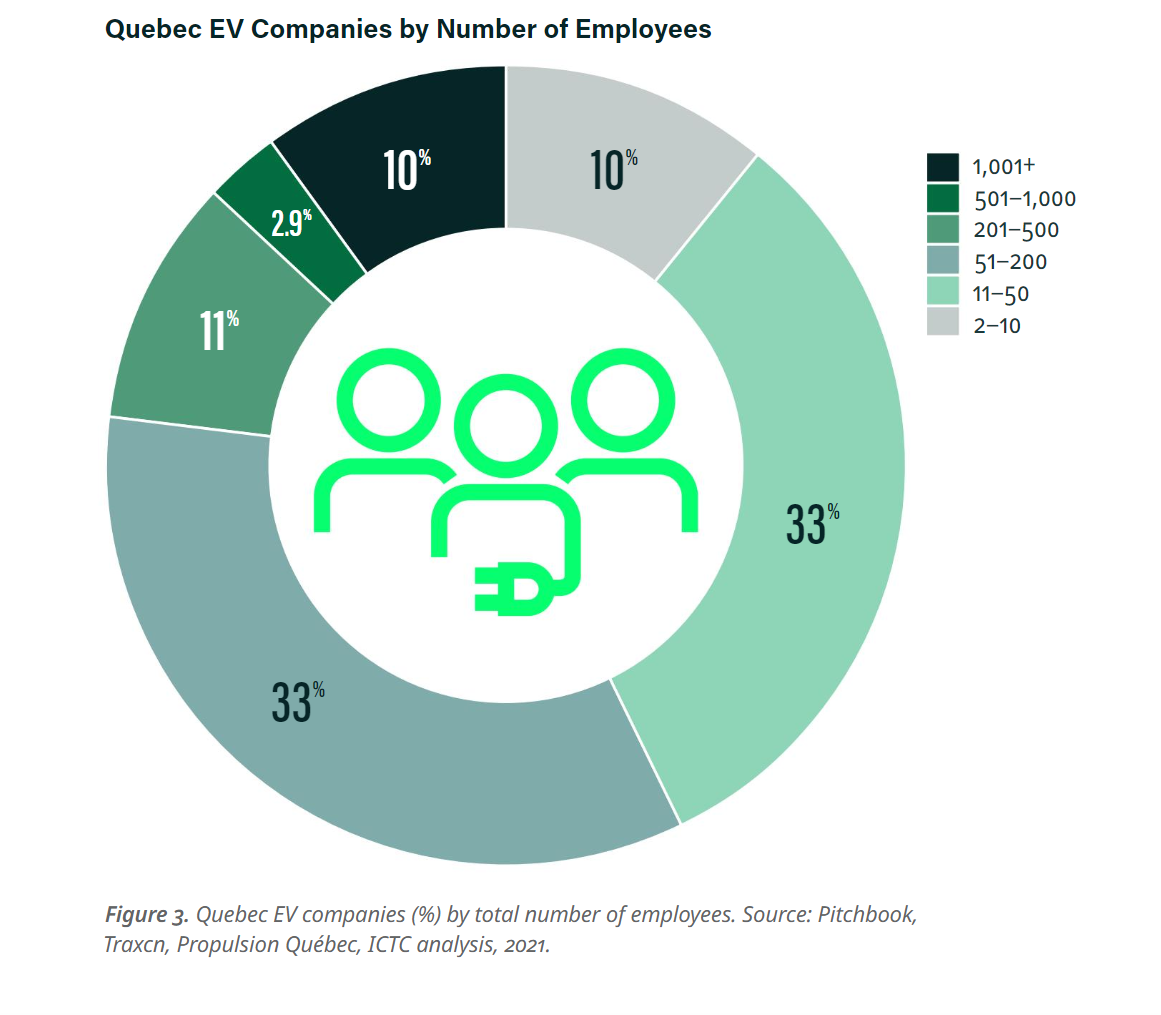 Example of a Quebec EV Company:

The growing adoption of EVs presents a major opportunity for Quebec to secure a key role in the EV battery manufacturing supply chain by leveraging its provincial strengths in raw materials, research expertise, and affordable clean energy.

Currently, most EV batteries are produced by suppliers in Asia: 80% of the world’s batteries are produced in Japan, South Korea, and China. China alone is responsible for the majority of global battery material processing and cathode production, giving it significant influence over pricing and supply chain flows. Consequently, many countries are exploring options for diversifying battery sourcing. 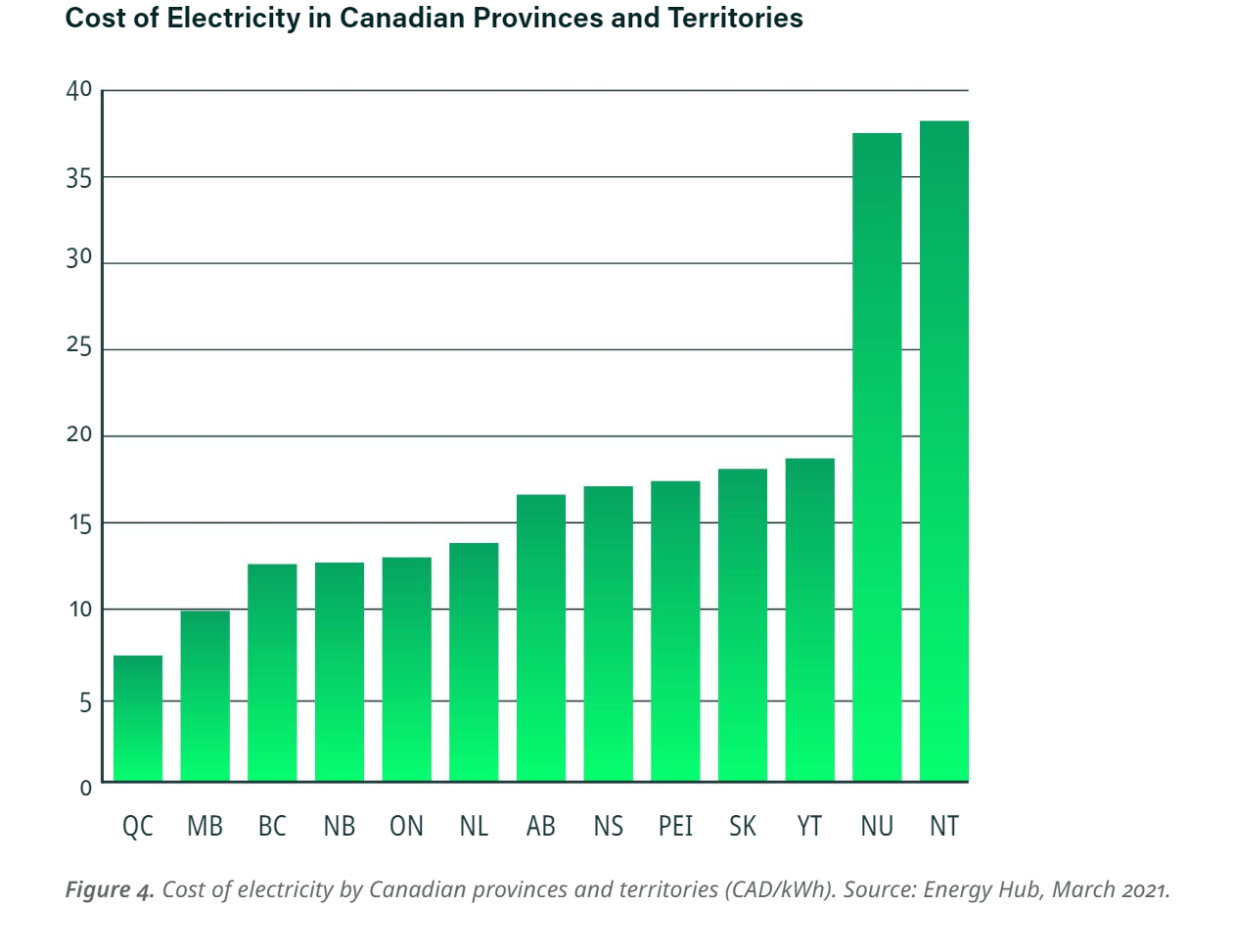 In planning for the emerging green economy, the province has launched two initiatives: Quebec’s strategy for developing a battery industry and the Quebec Plan for the Development of Critical and Strategic Minerals (the government is determined “to make Quebec a preferred haven for critical and strategic minerals value enhancement, including localized cleantech development and manufacturing.”

Impacts of EV Shift on Labour

The shift to EV from internal combustion engine (ICE)-powered vehicles will yield mixed employment impacts, including job losses and gains.

About 65% of jobs in the auto industry are based on tasks that can be largely automated over the next decade. Industrial robots reduce the need for human labour in various manufacturing tasks, including quality inspection, machine tending, material removal, and parts transfer.

Job gains are expected in technology-centric roles such as electrical, mechanical, and software engineers.

The shift from EV production is likely to increase the demand for high-skilled workers. 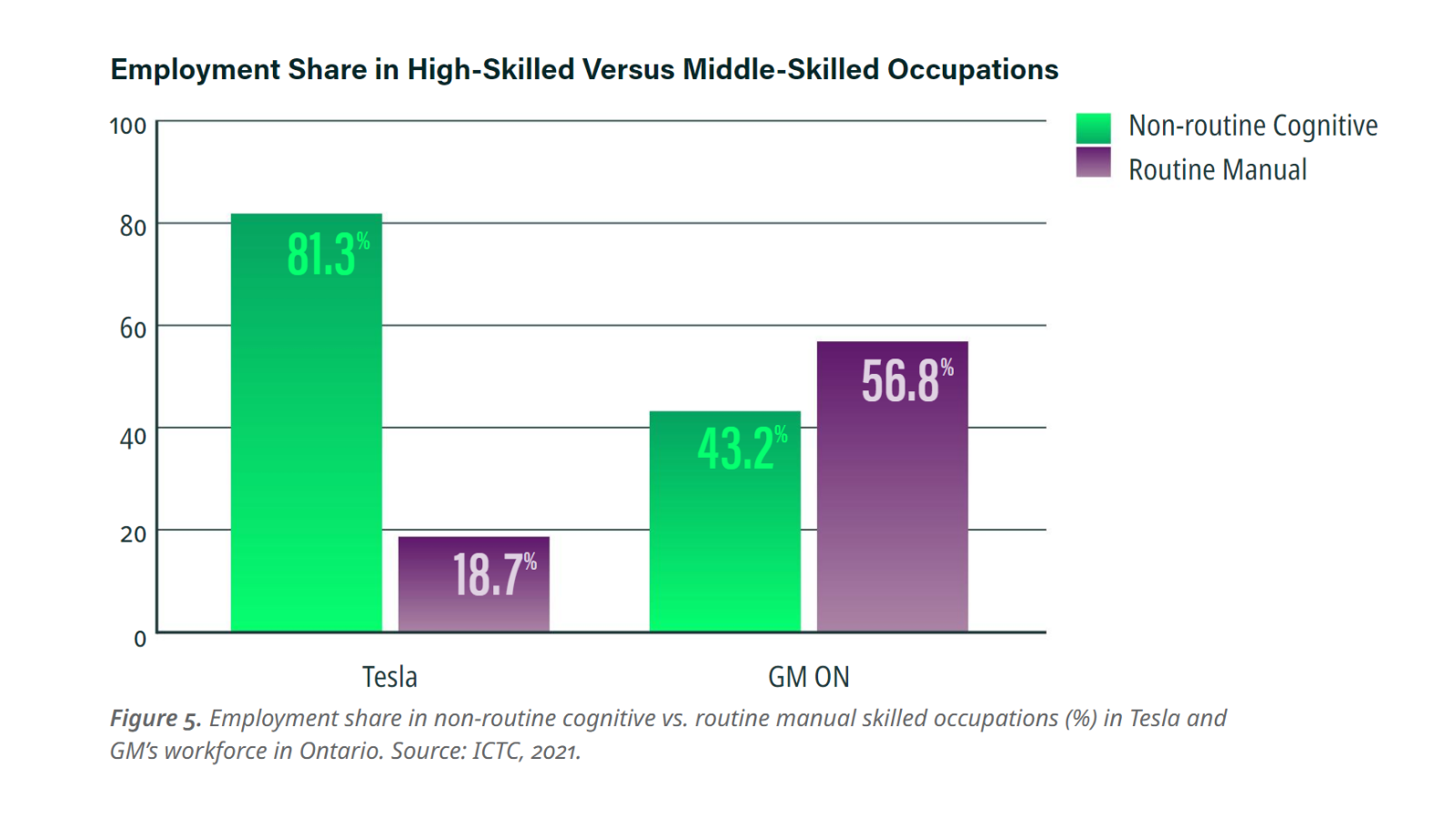 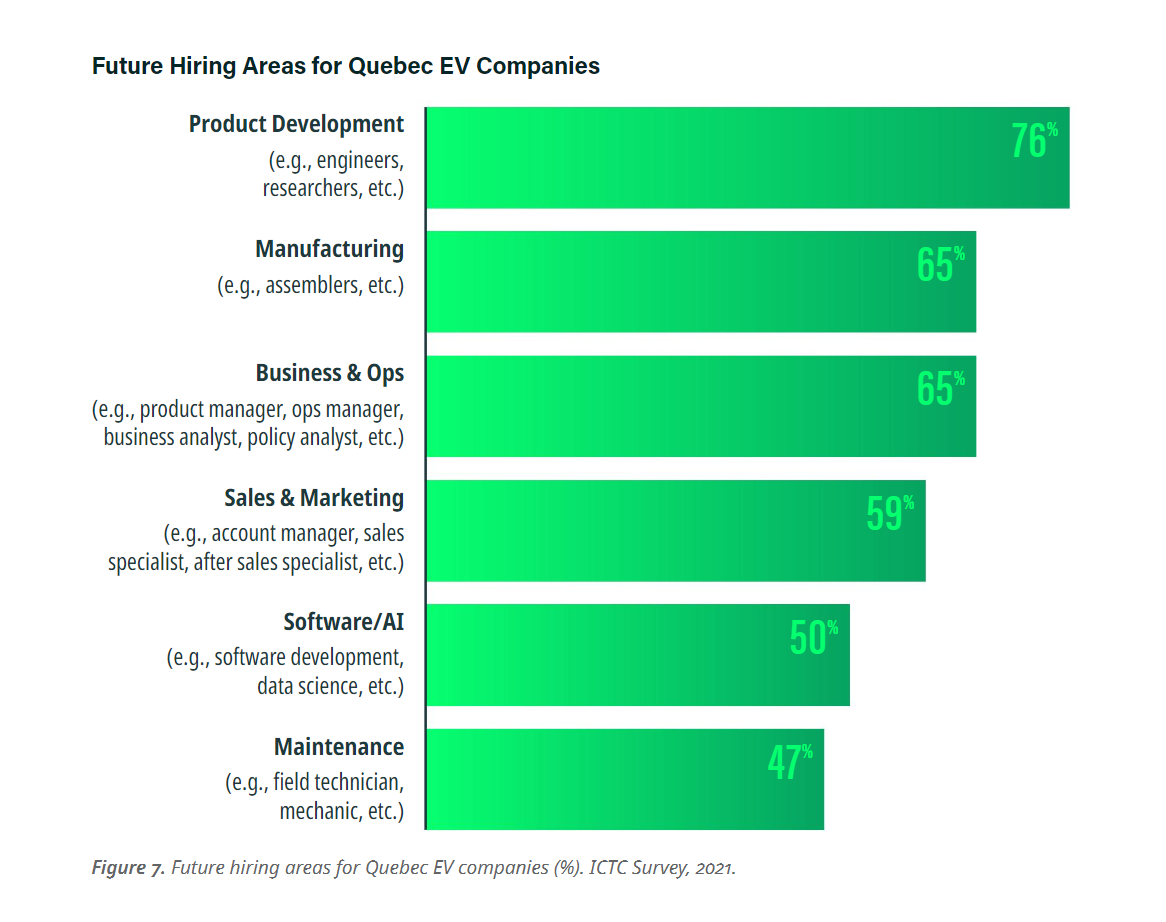 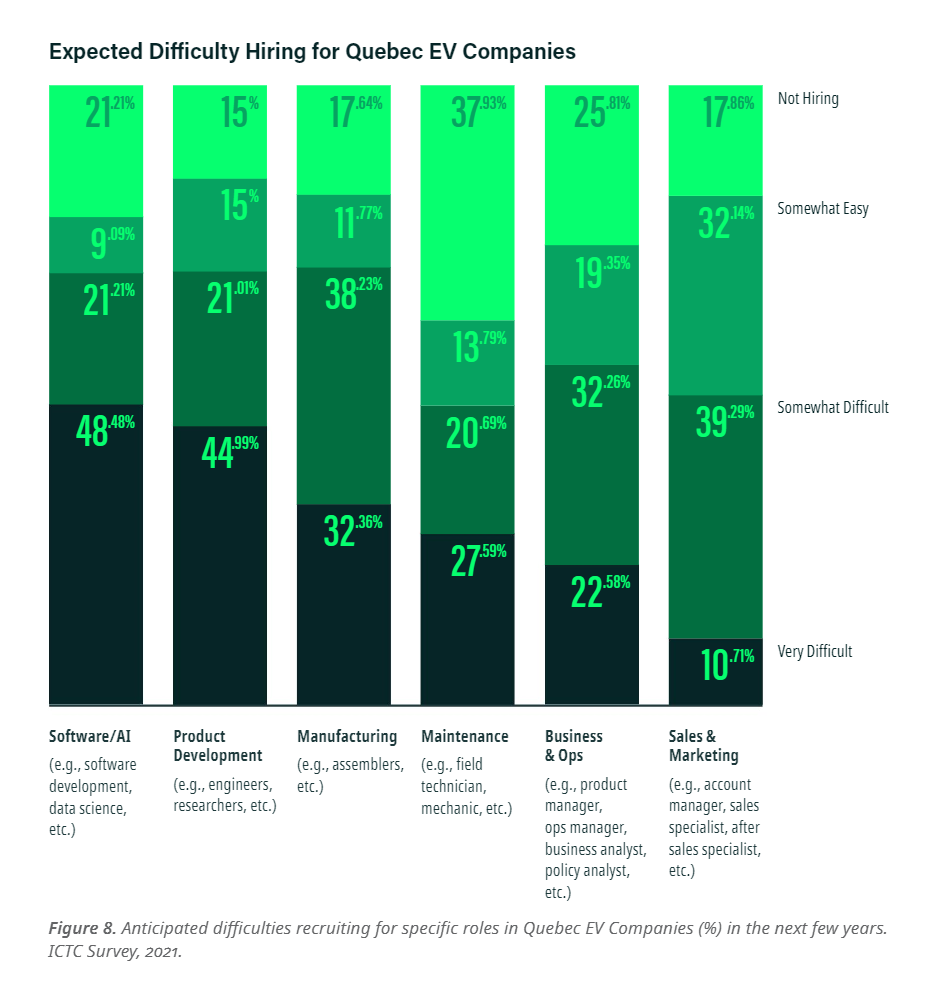 Longer-term in-demand skills per category and the occupations most often associated with the skills are presented in the report on pages 31—37 in the report, across the following six areas: software, data, industrial, service, process, and product.

Public policy in two forms can facilitate the shift to EVs and its requirements for skill-biased technologies favouring higher skilled workers (including roles that require a STEM education, expertise in project management, business development and sales, etc.):

1. Public policy that directly supports the development of a domestic EV supply chain, including a complete battery value chain

2. Public policy to prepare for the change in skill requirements triggered by the electrification of the auto industry

Quebec expects to reach carbon neutrality by 2050 and electrification of the transportation sector will be a key element of this target (transport contributes43% of the province’s carbon footprint).

As a final consideration, the Canadian government’s Just Transition discussion paper sets out comprehensive recommendations for how stakeholders can work together to enact a green industrial revolution toward net zero and meet the challenges of the needed workforce transition.