In 2022, Balenciaga released its summer collection using only digital clothes, PRETTYLITTLETHING debuted Luna, the fashion retailer’s first virtual model, and Alibaba introduced Dong Dong, their first virtual influencer. Part of a growing industry, virtual influencers are blurring the lines between our online and physical worlds: they are disrupting the marketing industry and are increasingly used by brands in ads, online stores, and social media campaigns. To learn more about this fascinating trend, ICTC’s Mairead Matthews talks with Makena Rasmussen, lead writer for VirutalHumans.org, an organization that publishes news and research about virtual influencers. Creative technology outputs like virtual influencers are incredibly relevant to Canada, which has several large creative tech ecosystems. Mairead and Makena chat about what makes a compelling character, why brands like working with virtual influencers, and what the next generation of “celebrities” might look like. 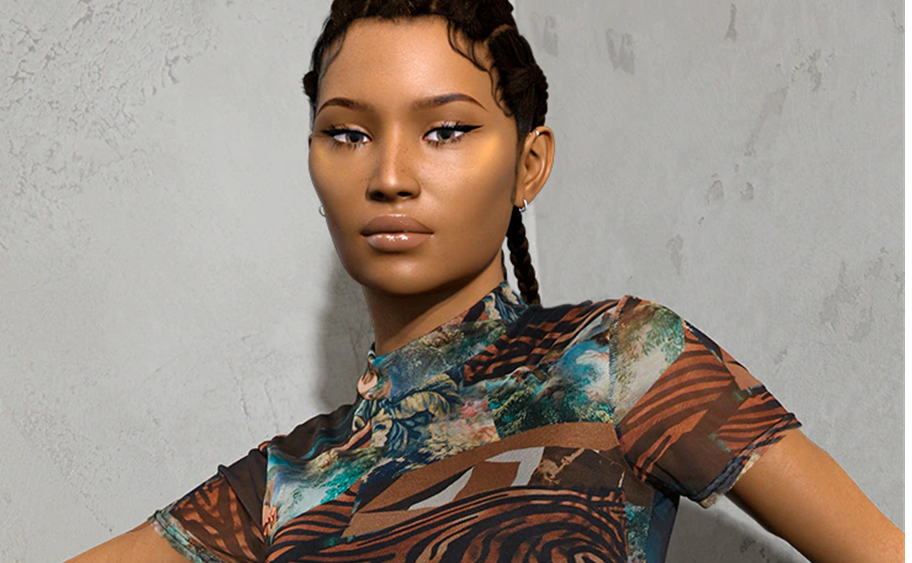 To begin, could you tell us a bit more about your work and organization in your own words?

I’m Makena Rasmussen, the lead writer for VirtualHumans.org. We’re a website dedicated to documenting and cultivating the virtual influencer industry. You can find all virtual influencers and their information in our site directory. We also do sit-down interviews with virtual influencers, share breaking news, and deeply analyze the industry. From gaming to fashion, and now, the metaverse, it’s never been a more exciting time to watch and share updates on this space.

What do you think makes a compelling or successful character? What do consumers find compelling in the virtual influencers they follow?

I always say that storytelling is the most critical aspect of a virtual influencer. The first article I ever wrote for the site was about the importance of storytelling and character development. Many people initially follow a virtual influencer for the novelty factor, but they stick around to see their story grow and develop. Miquela Sousa is one of the most popular virtuals. She has an entire backstory about being a robot trying to rediscover herself — it’s all very absurd and fun but also relatable to young people, which is why her fans love to follow her. Virtual influencers are like any other fictional character, except their story is told over social media from their perspective rather than a book or movie, and fans can interact with them directly.

The most important value a virtual influencer brings to a campaign is their novelty and futuristic element. It’s an easy way to communicate with your audience that you’re knowledgeable about internet trends and culture. Virtual influencers have double the number of followers aged 13–17 compared to human influencers, so their fan base is very young and on the pulse of online trends. Brands also love working with virtual influencers because of the safety and stability they offer. You don’t need to worry about old problematic posts or texts from a virtual influencer resurfacing online. You can also work with a virtual character indefinitely without them “aging out” of their roles. Think of how long the GEICO Gecko has sold car insurance compared to Flo from Progressive, who will eventually retire.

The same survey found that 54% of Gen Z and millennials want to know who is “behind the façade,” while 42% want to know whether the influencer is a brand: how can brands find a balance between intrigue and transparency when working with virtual influencers?

Honestly, this is one of the trickiest aspects of creating and running a virtual influencer! Striking the right balance between authenticity and transparency depends on the character. When a single independent artist runs a virtual, they tend to be more open with their identity as the creator, like Code Miko or Blu from Xanadu. An entire company with investors controls other virtuals like Miquela Sousa, so they tend to take more of a step back to keep the focus on Miquela rather than the company employees. However, that doesn’t mean they hide their identities entirely — many of them make cameos in her Instagram posts. Usually, when a brand creates their own in-house virtual influencer, they become a public mascot for the company, like the GEICO Gecko or Lu of Magazine Luiza in Brazil. As always, it’s essential for brands to disclose if something is sponsored content or not when working with a virtual influencer. Fans love to see their favourite virtual influencer get more growth opportunities, but transparency always comes first.

Like humans, virtual influencers are diverse, representing all genders, body types, ages, and ethnicities. But, according to some reports, their creators are less diverse and, at times, cross a line between art and gender or cultural appropriation. What are your thoughts on this?

I love that we live in an age where there’s open discussion and criticism around gender or cultural appropriation. I believe it’s vital to extend that discussion into the world of virtual influencers and ensure our virtual worlds are as diverse as our real one is. A famous controversial moment in the industry was when people discovered that the “first virtual supermodel,” Shudu, was created by a white photographer named Cameron James Wilson. If he had ignored all the criticism and continued to be the sole person behind her photos and captions, that would have been problematic because Shudu is just his puppet. But instead, he brought on Ama Badu, an incredibly talented writer, to become the “voice” of Shudu and bring her real-life experiences to Shudu’s story. I thought that was a thoughtful and sensitive decision on how to run a virtual character.

Social media and influencers can negatively impact teen mental health, for instance, contributing to unrealistic or distorted body image among teens. How might virtual influencers contribute to or counteract these trends?

Ultimately, there hasn’t been enough research on this for me to say anything definitively on how they affect others, but I can speak to how they affect me. Personally, I believe the most crucial distinction is that virtual influencers’ bodies are inherently “unreal.” For example, many human fitness influencers claim their body results from diet and exercise when there’s rampant steroid use in the industry. When I look at a virtual influencer, I know their body is the result of a talented CGI [computer graphics] artist. So, I see a virtual influencer’s body the same way I would see an illustration or video game character — sometimes they’re highly stylized with exaggerated proportions, and others are as realistic as possible.

Virtual influencers can be found on almost all the main social media platforms, including Instagram, Twitch, TikTok, and YouTube. How does their use differ across these platforms?

I love this question! Many virtual influencers tend to specialize in a specific platform. For example, super-realistic virtuals like Imma are the queens of Instagram because they produce stunning photos that do well on that platform. FNMeka is a virtual influencer famous on TikTok for his videos that feature insane fictional technology like a PS5 that also makes Starbucks coffee. Those short but captivating videos do very well on TikTok, and he now has over 10 million followers on the app.

It was hard not to get through the first few months of 2022 without hearing about NFTs (non-fungible tokens): what do virtual influencers have in common with things like digital fashion designers, NFTs, video game skins, and the metaverse?

Virtual influencers are digital beings, so they’re inherently connected to digital objects like NFTs or video game skins. As each of these categories begin to scale, and buying digital goods or meeting in digital spaces becomes more commonplace, virtual influencers will be the most effective spokespersons. Ten years ago, when social media first started, no one expected that “influencers” would become a new category of celebrity and a career for people to make a living from. When I imagine what the next generation of celebrities will look like, I think virtual influencers will be at the forefront.

It feels like there is a near endless number of ways to monetize virtual objects by merging the digital and physical worlds. Where do you see this trend going?

I think this trend will only become increasingly popular as technology advances. I genuinely believe that AR [augmented reality] technology will change how we do simple tasks like online shopping. Imagine being able to try on an AR lens of a pair of shoes you’re considering buying. In real life, I like to purchase clothing and accessories to distinguish myself from others. In video games, I like to buy virtual “skins” or clothing for my character for the same reason. I spend money on both of those objects (real and digital) and value them, but imagine if I could also own a virtual version of my favourite sneakers for my avatar to wear online. And who better to advertise a virtual or physical item than a virtual influencer who can show it off in real life and the metaverse

Makena Rasmussen Makena is a Writer for VirtualHumans.Org. She has loved virtual humans like Hatsune Miku since she was 13. Her years of writing and research are driven by her desire to understand how people connect with others virtually and what the future of self-representation online will look like.