What Drives Successful Exits in Canada

ICTC’s Mairead Matthews and Faun Rice sat down with Canadian entrepreneur Remi Schmaltz to talk about his experience in successfully scaling his second business, and to hear his advice for new startups. Mairead and Faun are the authors of an ICTC study on the relationship between intellectual property (IP) and scaling up. Remi is Co-founder, Director, and VP Corporate Development at Index Biosystems. He is also Founder and General Partner with Koan Agetch Capital and Co-Founder of Decisive Farming (acquired by TELUS).

We’ve all heard of “brain drain”—educated workers moving abroad for higher-paying work. A similar but debated phenomenon, IP leakage, happens when valuable IP, in the form of patents or trade secrets, is pulled out of Canada through acquisition by multinational firms. IP leakage may take place for a number of reasons: in Canada, many new tech companies have a hard time finding startup and scale-up funding, may not have previous business experience or IP literacy, and ultimately, may sell to a foreign company for lack of a Canadian buyer. Remi Schmaltz, an entrepreneur from Alberta, has a story that defies this trend.

Remi grew up outside of Calgary on a family farm that sold crop inputs (e.g., seed, fertilizer, crop protection products) to farmers. “My brother and I took over DynAgra after university, but the business was struggling.” They looked at where agriculture was headed and started piloting new technologies and service offerings, which would eventually become the core technology in Decisive Farming. 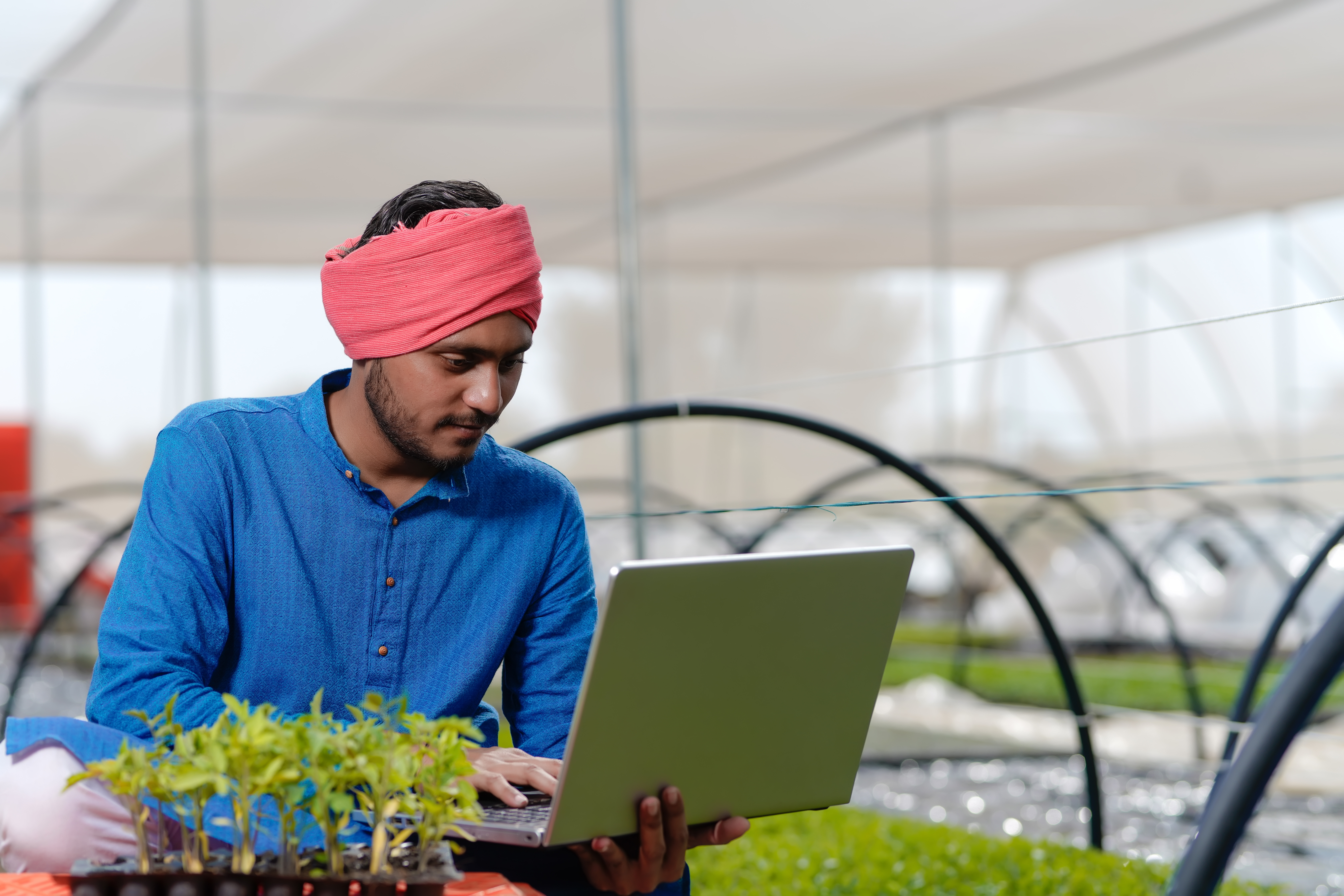 “DynAgra, I call it baptism by fire,” Remi joked. “Both my brother and I were fresh out of university, and we just figured it out. We did an SAP installation, and we homed in on inventory management and controls, created systematic, repeatable processes, cleaned house, and made it into a functioning business.” Remi and his brother, Tasha, had a lot of support along the way. Their father, an entrepreneur, remained on their board of advisors. They used resources like AVAC and a bootcamp called Randy Thompson’s bootcamp, and they often hired consultants with specific domain knowledge. “We’d bring them in on short-term contracts and suck their brain. For example, we would bring on someone in finance from Farm Credit Canada and say, ‘We’re creating a finance offering. We’d like to learn from you.’”

They also accessed government programs. “In the early days, NRC IRAP helped facilitate the research that needed to be done to prove out something before we brought it to our customer base. We had a great farm customer base already, and we wanted to make sure we were bringing forward something that worked and that we had science behind.”

Ultimately, Remi and his brother took DynAgra from $15 million to $30 million in revenue over five years and incubated the technologies that would become their next initiative, Decisive Farming. “Around 2011, we decided that what we were passionate about was the technology side, creating new things for farmers.” So, after acquiring the intellectual property from DynaAgra, they sold the retail portion of DynAgra to CHS and launched Decisive Farming in 2011.

Remi reflected that even though this company was new, it had a strong startup foundation. “I would say that we created a company, not a startup in the sense of how people think about creating today. When we spun out Decisive Farming, we had about 10 employees. We weren’t really a startup in our minds.” The group knew they needed capital but underestimated how much and how difficult capital would be to find in Canada. “There’s a lot of people who want to help and support companies in Alberta and Canada in general, but even though we went through all of the [funding] channels, met with different angels, and got a lot of positive reviews and feedback, it was really tough getting financial support from investors—angel investors in particular. It was a struggle on the venture side too to be honest.”

Many Canadian companies access early stage seed or pre-seed funding from friends and family or government grants and prizes, but struggle to obtain funding that will allow them to scale. In particular, Canada lacks Tier 1 and 3 investors, who seek deals of around $2 million to $5 million and above $20 million. Because of this, many Canadian businesses rely heavily on investors from the United States. “Just being in Canada, you’re at a disadvantage to U.S. startups, in terms of access to capital and in terms of valuations, which are lower in Canada,” Remi noted. When asked why, he explained, “The market is smaller, and it’s just not as competitive from an investor standpoint. It’s a cliché that if you’re a company from Silicon Valley, the base expectation of what your company is going to be worth is significantly higher than one from Canada.”

Scale-up funding is necessary for high-tech companies because it can take a long time to move from a concept or patent to a working prototype. In agriculture, growing a customer base also takes time. “Adoption in agriculture is challenging,” Remi explained. “It’s cyclical, and it takes time to build relationships on the farm.”

When we asked Remi what made Decisive Farming attractive to investors, he said that experience, market knowledge, and an existing customer base made all the difference to credibility. “There was clear value in our commercial traction with farmers. We maintained a very high retention rate. We always valued customer service and client relationships.” Furthermore, the patent portfolio that Decisive Farming had created made them a good long-term prospect and secured them freedom to operate as they scaled.

Patenting was a cornerstone of Decisive Farming from an early stage, but it was costly. A strong IP lawyer helped the young company build its IP strategy. “Our first patent, around variable rate technology, we only filed in Canada. At the time, we didn’t have the capital to file in other countries. We were a number of years away from getting to other jurisdictions, so we decided to save capital and file in Canada and went with our freedom to operate in those other countries on that basis.” As the company matured, it also filed patents internationally in major crop-producing countries like Australia, Brazil, the E.U., and the U.S. But, Remi noted that “it’s expensive and time consuming so, in those early days, it was a tough balancing act. There’s the short term and long term, and you have to survive in between.”

An invention of the mind, IP is highly related to talent. Early on, while developing the IP for Decisive Farming, Remi worked with NRC IRAP to flesh out what technical hires they’d need to bring on to the team. Being from Alberta, Remi took advantage of a local strength: affordable and highly skilled talent. “I think we were able to find a lot of really good talent and at a reasonable cost. That was our advantage. We had less capital, but we were more economical with the people we were hiring. We picked up some cornerstone employees who are still with the company today.”

Yet, being a rural business, with an office just outside of Calgary, had its challenges. “[It] was a bit of a double-edged sword. On the one hand, we could attract people who were sick of Calgary—the commute, paying for parking, dress codes, traffic. On the other hand, some of the people we interviewed were saying, ‘That’s 45 minutes from Calgary. That’s way too far.’ [So] we ended up opening an office in Calgary and hiring all our technical roles [there]: software developers, some marketing people, etc. It became our innovation hub.”

Selling a Business at the Right Time, to the Right Party

Strong talent, a growing customer base, and a thoughtful IP strategy made Decisive Farming an attractive business for acquiring companies. Over a three-year period, Remi received three unsolicited acquisition attempts. The third one stuck.

We asked Remi what made TELUS different from the other buyers. “There were three main checkboxes in my mind that [an acquirer would] need to hit. One was customers—was the acquirer aligned with our customers? We always viewed ourselves as independent and working for the farmers, but if we were acquired by a chemical or seed company, that would be a different paradigm. The primary focus would be selling crop inputs to farmers, rather than working on behalf of the farmers to better their farms.” On the other hand, TELUS was an independent player looking to add value to the farm, which Remi’s customers would view positively.

Remi’s second checkbox relates to a common concern among innovation policymakers: the hollowing out of acquired companies. “Was the acquirer going to hire more people, give them promotion opportunities, give them job security?” Here, too, TELUS’ corporate culture and growth and strategy plans aligned well with Remi’s vision for the company.

The third checkbox was financial. As the CEO, Remi had made promises to investors over the life of the company and had to deliver returns. The transaction resulted in the business being awarded Most Significant Tech Transaction in 2020.

Remi’s story is a reminder of how many factors shape the decisions of Canadian founders and CEOs, and of how difficult it can be to exit a company on its own terms (rather than selling too soon, or with pressure from a board or investors). Decisive Farming passed up two acquisition attempts before finding the right fit, but not all founders have this kind of freedom or flexibility when considering an exit. A number of factors might constrain a startup to the point of accepting an unsatisfactory acquisition, such as a poorly planned IP strategy, difficult to access customer base, lack of scale up capital, or pressure from investors. In many cases, a Canadian startup’s first or second acquirer will be from a multinational business. In some industries, finding a Canadian buyer might be impossible, which goes back the concept of IP leakage.

When asked if he had thought about Canadian ownership during the sale, Remi replied, “I think that’s always the Holy Grail. I’m proud that we are a foundational company in TELUS Agriculture, a Canadian entity and one of the largest agtech entities in the world. I think it’s cool for Canada that we maintain the jobs and IP here. I think it’s a huge success story that everyone who supported us along the way should be proud of.”

Canadian or not, successful exits can help build local business density and make more capital available in Canada’s innovation ecosystem. After his exit, Remi returned to the startup space as a mentor and board member and became a local agtech investor. “I wasn’t looking for a job, more for a partnership. I wanted to add value with complementary skills and a deep dive into a startup where I could contribute… That’s the cycle we need to continue to grow in Canada, and that’s how we’ll build this ecosystem out: more people having successful exits, and wanting to share their journey through mentorship and by supporting the ecosystem.”

Stay tuned for the second article in this series, where Remi offers advice for entrepreneurs beginning their own journeys.